The Golden Era of the Good Script: Some Notes on "Isle of the Dead" 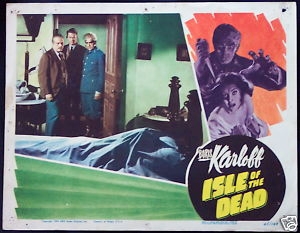 We will never know if Val Lewton was being self-referential or not, when he referred to Isle of the Dead as being “an unholy mess of a film”. The phrase ‘unholy mess’ was originally presumed to refer to a number of detrimental incidents connected to the  making of the film. The worst of these was that Boris Karloff had a serious back condition and was forced to have an operation, which held up production for a considerable time. According to most sources it was not an easy film to make for all persons concerned, hence Lewton’s (apparently)  dismissive remark. But I think that it needs a little more elucidation than that. 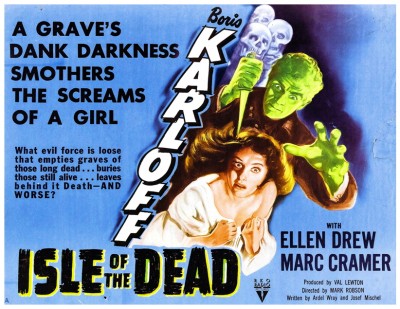 The phrase “unholy mess” I think tells us more about the artistic pre-occupations of Val Lewton himself, than it does about Isle of the Dead’s troubled gestation. This seemingly off-the-cuff remark could also reflect Lewton’s sense of frustration at his status as a B-picture producer, with the concurrent pressures of getting a picture made on time with very little rehearsal, and even less money to spend on making it look (and sound) respectable.

Maybe Lewton  was (unconsciously) acknowledging a  primary theme of his movie by his use of the word ‘unholy’,  and the particular theme I am refering to is  the seeming incompatibility  between folk belief and organised religion in primitive cultures.  Isle of the Dead, whilst not exactly in the same league as Cat People  or I Walked With a Zombie  is a doom-laden saga about the inevitability of death, with a few effective scares thrown in for good measure. As a counterpoint to the 'action', there is also some interesting and somewhat provocative discussion between the characters about the nature of religion, and the decline of superstitious belief that, will certainly enthrall you if you find these issues to be important.

Keeping  in mind that Lewton may have said it was "unholy mess of a film" at a time when he was obviously unhappy with the finished product, we should also remember the number of  artists who have ever, in history, denigrated their work as being unfinished, unsatisfactory or just plain bad, ie ‘an unholy mess’ (I haven’t sat down to make a list, but I’m sure there’s lot).  I’d like to made the case that the power of the phrase ‘unholy mess’ is unfortunate, in that it turns potential viewers away from sitting down to watch the film to judge for themselves, and makes it more difficult for those of us who actually like Isle of the Dead, from explaining exactly why it is we do like it. 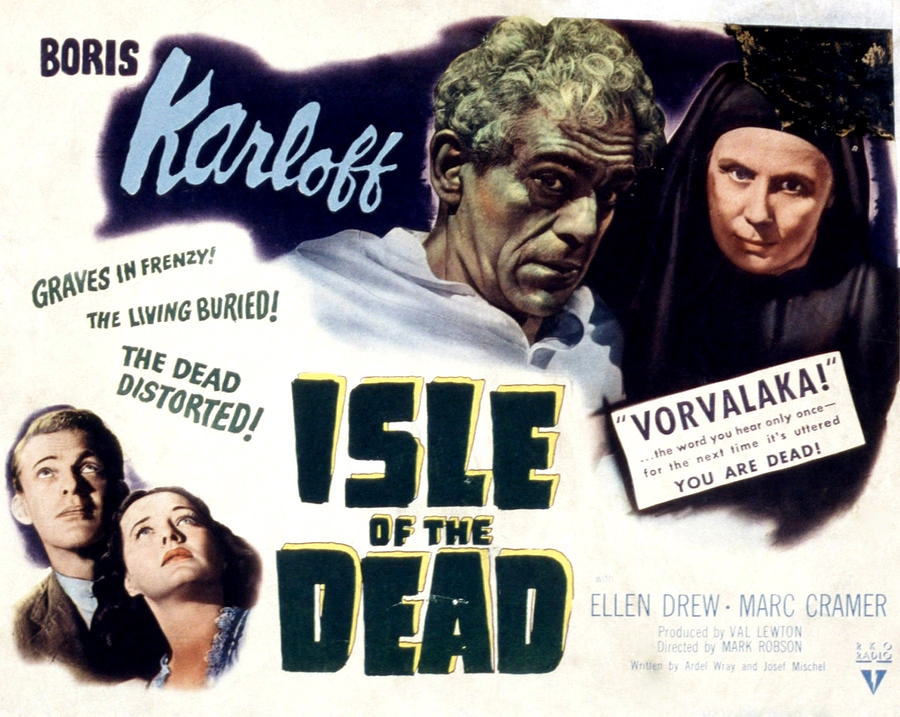 Recently I sat down to  watch Isle of the Dead for the umpteenth time, in order to nail down exactly why it was that I liked it on first viewing, and still do. I can think of no other way to do this, than  basically ignore all aspersions against it, and concentrate instead on giving the reader some kind of idea as to why it works for me, personally. To do this, I sat down to make a Cliff’s Note analysis of the plot, made out of all due respect, and hopefully without any spoilers. What I love most about the film is that it’s a fine example of the kind of literate script that most movie moguls of the golden era would kill for.  Or for that matter, move moguls of any era, including our own. If this gives the readers of this blog an indication of the quality of Isle of the Dead, then I should be very glad and not a little grateful. I include stills and posters in order to illustrate the main points, and to break the monotony for the reader.

The screenplay is credited to Ardell Wray, but was most likely unofficially revised by Lewton. This was Lewton’s approach to the screenplay, as with all of the films he made at RKO. Whilst some performances are of varying quality, I think that Boris Karloff acquits himself better than the supporting players. I can only discern two  of Lewton’s stock company  Skelton Knaggs  and Alan Napier in minor roles. Director Mark Robson seems to have concentrated on keeping Karloff’s character if not on-camera constantly, then at least being talked about by the other characters.

The cinematography by Jack Mackenzie is atmospheric and striking, and the music by Leigh Harline is apparently taken from the Rachmaninoff Symphony of the same name. It is stunningly suitable for such lugubrious subject matter. Both film and symphony were suggested by the painting ‘Isle of the Dead’ by Austrian artist Arnold Boecklin. There’s an interesting web page about the artist here.  Despite what I’ve read elsewhere, I think that Boris Karloff gives a good performance as General Pherides, a handsome and distinguished Greek officer obviously troubled as a direct result of his experiences in the Balkan war of 1912 . 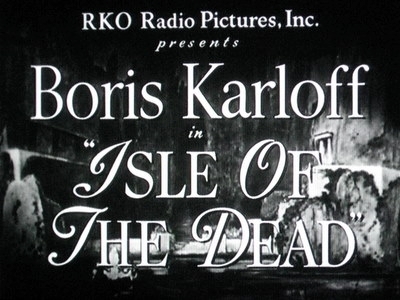 Boris Karloff (General Pherides) orders one of his men to commit a self-destructive act over a minor infraction. Marc Cramer (Oliver Davis) is a journalist who looks on as the harsh judgment of the General is carried out.

SINGING IN A CEMETERY 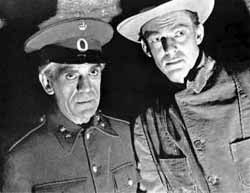 The General takes Davis to visit  a cemetery on an island away from the fighting of the Balkan war of 1912. A mysterious voice emanates  from far away.  Afterwards they take refuge at an inn on the island. Other people staying at the inn include Mr St. Aubyn (Alan Napier), his invalid wife (Katherine Emery) and her housemaid Thea (Ellen Drew). Thea is introduced to the General but is aware of his reputation for cruelty.

THE CANDLE GOES OUT

Thea attends to her mistress and asks Mr St Aubyn for his wife's medicine. She runs into the General and they exchange angry words. Thea accuses the General of being a cruel martinet and not a true Greek nationalist.

A GRAVE MATTER/WE WILL FIGHT THE PLAGUE 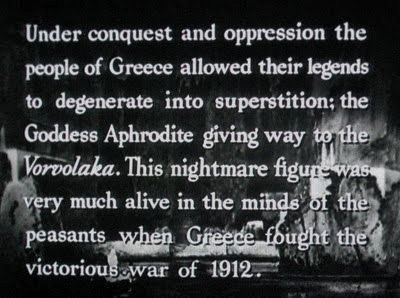 Staying at the inn also is Londoner Mr Robbins (Skelton Knaggs). He is mysteriously found dead and the General suspects an outbreak of  plague. The General declares martial law, and allows nobody to leave the island, as he holds grave concerns about the health of his troops and what will happen if they are infected and unable to fight.

YOU CANNOT WASH AWAY EVIL

A vorvolaka is an evil spirit. Madame Kera (Helene Themig) is an old woman who believes the ancient superstitious folk beliefs of her people. Kera accuses Thea for being an evil spirit reincarnated,  whose presence is the cause of the outbreak of  plague. It appears that Mrs St Aubyn's husband has been infected but Mrs St Aubyn refuses to believe that he will die.

Mrs St Aubyn explains her fear of premature burial, as an invalid who often goes into a trance-like state where it appears she is no longer alive.

A PRAYER TO HERMES 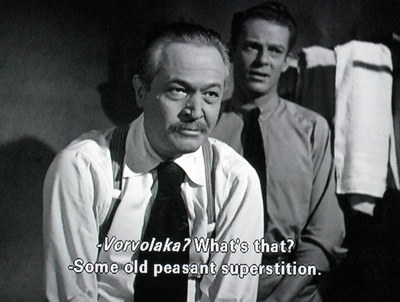 The Doctor (Ernst Dorian) surrenders his belief in science in deference to the Greek god Hermes,  He fears he is infected by the plague.

I'M NOT AFRAID OF DYING


Mrs St Aubyn nurses the doctor. Other characters pray to Hermes but the General does not. The General explains he is an atheist. Oliver believes the General is a good man who is attempting to protect them.

FEEDING THE FIRES OF AN OLD GOD

Kera explains her beliefs in evil spirits to the General. During sleep, the spirit spends its time with demons.

ARE MY THOUGHTS DIFFERENT TO OTHER MEN?

Oliver sympathises with the General, realising he is fighting something bigger than the plague. Thea calls Kera's superstitions 'stupid'. The General threatens Thea with his knowledge of evil spirits and accuses her of causing the decline of Mrs St Aubun who is becoming weaker.

COULD IT BE MY SPIRIT 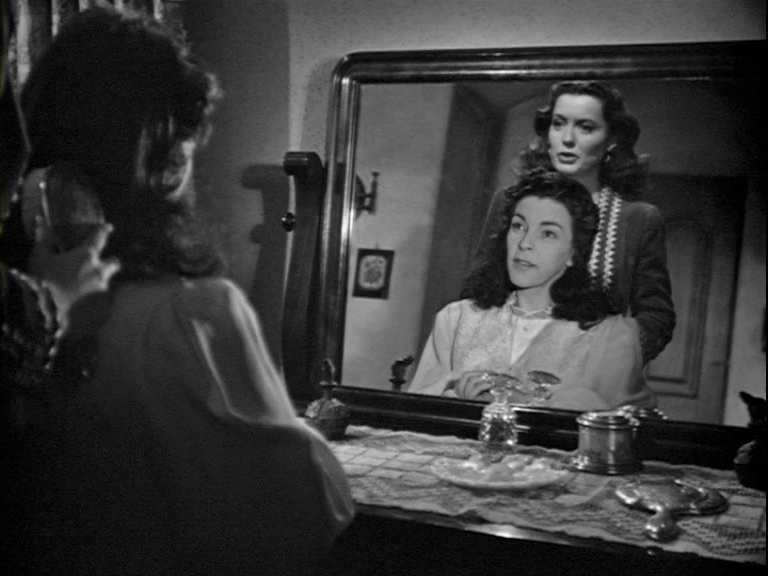 Mrs St Aubyn explains that she trusts Thea. The General confronts Thea and Oliver. Oliver defends Thea from the General's accusations. The General becomes unhinged and plots so that Oliver and Thea will not be able to leave the island.

I CANNOT SEE THROUGH STONE AND MORTAR...LIKE SOME I KNOW

A CROSS OF ASHES ON THE DOOR

Mrs St Aubyn collapses and Thea fears she will be blamed for being a vorvolaka. The General forces his way into Mrs St Aubyn's room, and the General accuses Thea. Oliver tells Thea to avoid the General. 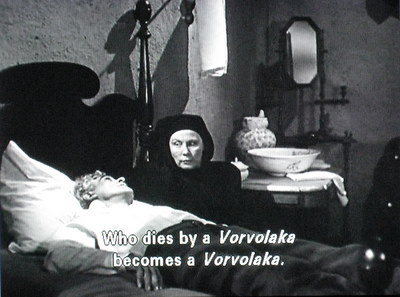 The General fears he has been infected with the plague. A slow  drip of water in an empty tomb suggests that maybe a vorvolaka exists amongst them after all.

The General hallucinates on his deathbed about Thea. Thea hears a singing bird and looks for it in the forest, but fears for her safety and seeks refuge in a stone tomb, She escapes from an apparition who is hardly seen. The General recovers to find out he has been unable to protect Kira.

Thea makes her peace with the General who thinks he saws the vorvolaka. Oliver and Thea are free to leave the island.

This can only get better